CASE OF THE MONTH

A 10-year-old male neutered DSH presented for what the owner described as black growths in the ear. The cat was indoor-outdoor and the owner only noted the lesions 2 weeks prior but was not sure how long ago they had started growing. The cat did not seem to be bothering at the ears. A general physical examination was unremarkable. On otic exam of both ears, multiple blue/gray firm growths of varying sizes were noted. They did not cause any pain when palpated and the rest of the ear exam was normal. None of the growths were obstructing the ear canal. After discussion with the owner about a probable diagnosis of ceruminous cystomatosis based on classic clinical presentation, the patient was sent home without any medications or treatments and with instructions to monitor for any clinical signs of otitis. 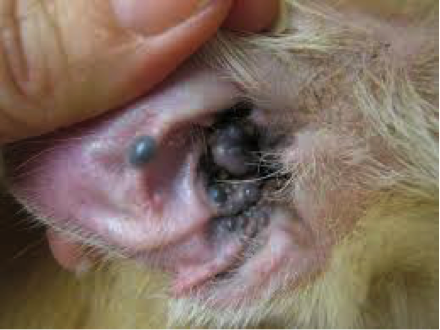 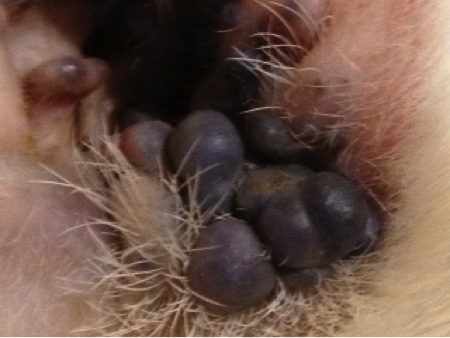 Ceruminous cystomatosis (ceruminous adenoma, apocrine cystadenomatosis) is an uncommon, non-neoplastic (cancerous) disorder of cats. Lesions most commonly affect the inner surface of the pinna and ear canal. The cause is thought to either be congenital or degenerative in origin but is most commonly seen in middle-aged to older cats. Abyssinian and Persian cats seem to be predisposed.

The lesions appear as single to multiple blue or purple nodules or vesicles. When they rupture, a brown to black thick fluid is produced. They can be confused for melanomas or tumors of blood origin but the diagnosis can be confirmed with a biopsy, which reveals clusters of cystic glands. The growths are not typically painful or bothersome to the patient and more commonly are addressed because they are cosmetically disturbing for owners. However, if the lesions grow and start to occlude the ear canal, they can disrupt the normal environment of the ear and lead to otitis.

Treatment is usually reserved for the cases that are causing recurrent otitis as otherwise it is purely a cosmetic condition. Treatment involves removal of the lesions (which often will regrow and need to be removed again) either surgically, with a laser, or with cautery. It is important to note that surgical removal will likely lead to scar tissue formation and some deformation of the pinna.